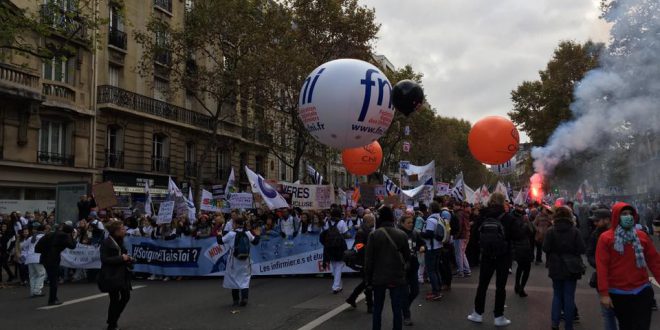 Today, it is the strike of the caregivers. 28 years after the largest strike undertaken by nurses, we are back on the pavement. In the meantime, any event.

Today, I was in this sea of white coats in the streets of Paris, the side of my colleagues infirmier(e)s, aid-caregiver(es), iades of ibodes, liberals, but also of the nursing students present in the mass. It was a thousand it seems, a few tens of thousands through the different cities of France. 10,000 on 650.000 nurses about ? It’s still just too little.

We know that we are a business hardly to be on strike. Finally, I hear talk about the fact that it is difficult to demonstrate in large numbers in the street. Why ? Because we are a population that is requisitioned and the need to remain in our service to ensure the continuity of patient care. Logic to me would you say, even without a requisition, I think that we would remain in our services. It is hard to see leave our patients without anyone to take care of them. Because we take care of but who takes care of us ? We look around us, sad to say that no one is there.

Today, the event has made the noise all along the procession, the party of the Montparnasse train station to join the ministry of Health, you know where is the hideout of our minister. Finally, the minister, the other there, because it is no longer ” ours “. Besides, she is well stashed behind a horde of CRS that have blocked the street in order not to go to the local glass. Come on, we are peaceful, we don’t hit, we get hit on.

Today, I saw a low rate of participation in the strike, but at the same time a great movement of solidarity. Even for those that may not be present. Then it ends by saying that it is the fault of the requisition… She has a good back this requisition. If I look in my service, on 60 nurses, they are 20 to be requisitioned. Where are the others ? In my former service, it was 5 or 6 nurses for only 2 requisitioned the day of a strike. So where are the others ? I understand that this story of requisition is painful to allow us to strike properly but when the same (Good this is from my point of view, I understand the difficulty to move). May be it’s mainly the fact that our dear MST shows its inintérêt persistent in the face of the profession, has never shown the slightest importance so why move seen as it does not do so and will certainly never our solicitations. She waits for surely the “phew” of relief as it will make the keys of his ministry. Also, note that she still said a word about this strike… But not to us. Behind the scenes view of a senator :

The minister @MarisolTouraine points out that the rate of #strike #nursing is only 8%, and mark her lack of consideration. #Senate pic.twitter.com/KlcLeRZuPj

Anyway, fortunately, the nursing students were in the procession. Ah well, yes, they can mobilize them. Moreover, one would have believed at the start to a demonstration of nursing students. We could hear them. Very well the youth, shout ! We old, we look at you with a smile, thinking that you defend your future profession. Business, which for us, has led us to blaser.

It should be noted a small note of joy with this “grandma smiling at her window, who watched the procession and was shouting out” cuckoo” . Not without humor, it will respond with a greeting that brought up the screams in the procession to greet her. Ah, if she knew we bat certainly for us but also for her, showing our ras-le-bol of our daily life to prevent the deterioration of care towards people like her, like you.

I would have often heard on the radio, on the television and read in the press that we don’t have the time to piss or eat. It is true, there is more time for us. Good post, to say that it was not the time to piss may be overkill. Me personally, I take a minute to piss. No, but in fact, through these words stands a picture. A symbolic way to say to all of you, the patients, the population, the bureaucrat that we have more time. More time to take care of the patient, you always ask for more. Question of performance… I arrived in a hospital, in a public function that gave a meaning to the word ” care “. I am now in a company, which I repeat over and over that it is necessary to make economies vis-à-vis our new ” clients “, a term very meaningful, which means our patients.

So to all the caregivers, stay motivated and keep going ! Stop being silent, stop say that it doesn’t, continue ! Go to the streets, make your voices heard ! Make actions shots of fists in your services, put a scotch “on strike” it is well, it is better ! Do you also the minimum, do not fill out more paperwork, limit you care as is necessary and urgent. Me in any case, I am preparing to be a strike in my service to bend the hospital. As much to annoy them rather than a government that does that to you.